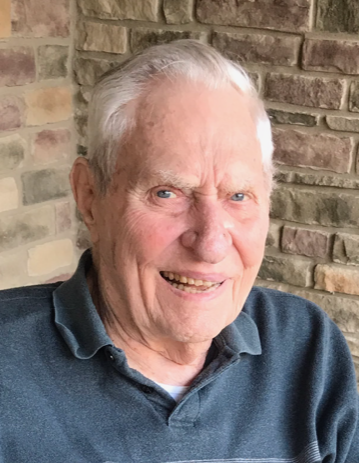 Charles Kinser Jr., 94, formerly of Amanda, passed away on Monday, January 8, 2019 at Primrose Memory Care in Lancaster.  He was born August 20, 1924 in Fairfield County and was the son of the late Charles and Clara (Lindsey) Kinser Sr.  Charlie spent his first 10 years in school attending Walnut Schools and graduated in 1942 from Amanda High School where he met and married his high school sweetheart, Eva.  They were married 73 years until she passed away on November 16, 2017.  He was drafted into the U.S. Navy during  WWII and spent his time state side in Cape Canaveral, Florida at the Banana River.  He served as an aviation electrician.  He was a former milk carrier for Pickerington Creamery and was an electrical contractor and owned Kinser Electric serving the area for over 40 years.  He loved to farm tending to his 70 plus acre farm.  He enjoyed dancing with his wife and traveling across the United States in their motor home.  He was a member of Amanda United Methodist Church and a 68 year member of Amanda Masonic Lodge #509 F & AM where he previously served as Master.
He is survived by a son, Steve (Karen) Kinser of Lancaster and a daughter, Cindy (Tim) Keesee of Villa Rica, Georgia; grandchildren, Ashley (Jeremy) Dearth, Ty Kinser, Jeremy (Rebekah) Keesee and Nathan Keesee; great granchildren, Olivia, Annie and Mitchell Dearth, Emmett and Stella Keesee; sisters, Norma Jean (Don) Kraft and Carolyn (Lloyd) Eads both of Lancaster; he is also survived by a former daughter-in-law, Pam Kinser of Lancaster.  In additon to his wife, he was preceded in death by a brother, Merle and a sister, Ruby Christy.
Funeral services will be held 11:00 a.m. Saturday, January 12, 2019 at the Taylor Funeral Home in Amanda with Rev. Gerald Mershimer officiating.  Burial will follow in Amanda Twp. Cemetery.  Friends may call from 4-7 p.m. Friday at the funeral home.  A masonic service will be held at 7:00 p.m. Friday.
The family would like to thank all the people involved in Charlie’s life at Primrose Retirement Center and Primrose Memory Care for the excellent care and compassion.  The family would like memorial contributions to FairHope Hospice, 282 Sells Rd., Lancaster, Ohio 43130 in Charlie’s memory.

To order memorial trees or send flowers to the family in memory of Charles Kinser Jr., please visit our flower store.