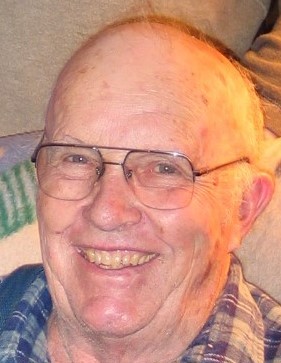 John P. LaRue Jr. (Jack)  91, went home to be with our Lord on Thursday, September 6, 2018.  Jack was born December 28, 1926 the elder son of the late John Peter and Esther (Newman) LaRue Sr.  Jack was a lifelong resident of Stoutsville, Ohio. He graduated from Stoutsville High School in 1944 and enlisted in the Navy to serve his country.  Upon completion of his service Jack attended and graduated from The Ohio State University and for a brief time served as the 4-H Extension Agent for Pike County.  On August 2, 1950 Jack married Mabel K. Holbrook and they enjoyed a long life together until her passing in 2004. Jack farmed his entire life and contributed to the local community as a 4-H leader for 30 years and volunteered at his church as a youth fellowship leader, trustee and Sunday School Teacher for many years. Jack enjoyed traveling the world with his wife, was a loyal Buckeye fan and an avid reader often reading many books a week. Jack was a devoted family man and was especially proud of his grandchildren.  He will be missed by all who knew and loved him.
Jack is survived by his four children, Kathleen (Herb) McGrath, Wayne (Jennifer) LaRue, Dean (Wendy) LaRue and Mark (Amy) LaRue; ten grandchildren, Michael (Marnie) McGrath, Matthew (Becky Carroll ) McGrath, John (Charlotte) LaRue, Jacob LaRue, Joshua LaRue, Isaac LaRue, Sarah LaRue, Lydia LaRue, Caleb (Sally) LaRue and Hannah LaRue; four great grandchildren; brother Ralph E. LaRue, three brothers-in-law, Boadie Harvey, William Holbrook and Charles Holbrook.  Jack was preceded in death his wife, Mabel LaRue and by two infant daughters, Kay Arlene and Colleen Anita.
Services will be held 1:00 p.m. Saturday, September 15, 2018 at the Taylor Funeral Home in Amanda with Rev. Marilin Miller officiating.  Burial will be in Maple Hill Cemetery in Stoutsville.  The family will receive friends on Friday, September 14, 2018 from 5-8 p.m. at the funeral home and one hour prior to service on Saturday.   In lieu of flowers donations can be made to the Pickaway County Library, 1160 N Court St, Circleville, OH 43113  (http://pickawaylib.org/ ) or charity of choice in Jack’s memory.

To order memorial trees or send flowers to the family in memory of John "Jack" LaRue, please visit our flower store.