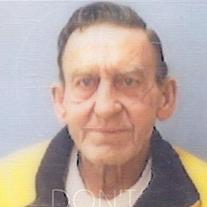 James L. Murphy, 63, of Lancaster, passed away 11:30 a.m. Friday, August 20, 2010 at his residence with his family by his side. He was born January 30, 1947 in Logan and was the son of the late James E. and Mary (Warren) Murphy. James was a block mason for over 40 years.
He is survived by his wife of 40 years, Sue (Brown) Murphy; children, Ginnie Murphy, Shannon Danner, Patty Flowers and Chris Murphy all of Lancaster; grandchildren, Christina, William "Dink", Josh, Mariah, Jeremiah, Amber, Keyara, Kayla, Heather, Stacy, Nikki, Andrea, Seth and Sierra; great grandsons, Braydon and Landon; nephew, Michael Freeman of Amanda and many friends. In addition to his parents, he was preceded in death by a son, James Lee Murphy II.
Cremation has taken place and a memorial service will be held 7:00 p.m. Friday, August 27, 2010 at the Taylor Funeral Home in Amanda. The family will receive friends from 6:30 p.m. until time of service.
To order memorial trees or send flowers to the family in memory of Mr. James Lee Murphy, please visit our flower store.