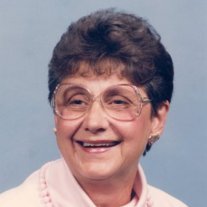 Evelyn L. (Frieberg) Struble age 87, formerly of Circleville, passed away Tuesday, April 23. 2013 in Dayton, Ohio. She was born July 21, 1925 to the late Karl and Iva (Fraime) Freiberg in Greenup, Kentucky. She was married to Allen C. Struble in 1945 and moved north to Ohio from Mississippi. They were married for 45 years. Evelyn was a member of the Calvary United Methodist Church, and Evelyn's Christian witness throughout her life was an inspiration to all who knew her. She was Girl Scout leader, bird watcher, and worked as church treasurer at the Methodist Church in Ellwood City, PA. She was also a member of Eastern Star and the Dayspring Organization. Evelyn is survived by daughter, Candace (Kurt) Hunter of Circleville; son, Dale (Nancy) Struble of Dayton, granddaughters, Evelyn Anne Becker, Kathryn Hunter, Natalie Struble, Celia Struble and Julianna Struble; great-granddaughters, Lucy Becker and Leah Becker. In addition to her parents, Evelyn was preceded in death by daughter, Karen Kay Badurina and sister, Kathryn Hearn.

Private grave side service at the request of the family was held on Wednesday, April 24, 2013 at Forest Cemetery in Circleville with Rev. Barry Burns officiating. The family requests memorial contribution to the Calvary United Methodist Church, 427 S. Washington St., Circleville, OH 43113 in Evelyn's Memory. Arrangements by the Taylor Funeral Home in Amanda.
To order memorial trees or send flowers to the family in memory of Mrs. Evelyn L. Struble, please visit our flower store.