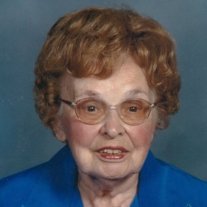 Virginia I. Stone, 92, of Lancaster, passed away Sunday, February 17, 2013 at Crestview Manor Nursing and Rehabilitation Center. She was born October 11, 1920 in Vinton Co., Ohio and was the daughter of the late Carl and Garnett (Clark) Glaspell. Virginia was a 1938 graduate of McArthur High School and life time member of Mt. Zion United Methodist Church. She retired from Hart's in 1983. She was associated with Meals on Wheels, secretary of the Fairfield County Kidney Foundation, loved to bake cinnamon rolls and quilted numerous baby blankets for newborns for many years. She was a devoted mother, grandmother and great grandmother. Her happiest times were with her family and friends. She was the most caring woman to everyone she knew.
She is survived by her children, Beverly (Donovan) Rollyson and Richard "Rick" (Debbie) Stone both of Canal Winchester, Diana (Larry) Sykes and Steve (Vickie) Stone both of Circleville; grandchildren, Kristin (Brett) Reinschell, Heather (Kim Falcon) Stone, Lisa Sykes, Hillary (Jeff) Bradbury, Whitney (Ben) Shaffer and Travis (Michelle) Stone; ten great grandchildren; sister-in-law, Florabelle Funk of Logan; brother-in-law, Wendell Davis of Logan and numerous nieces and nephews. In addition to her parents, she was preceded in death by her husband, John Robert "Bob" Stone; sisters, Ruth Badger, Lorraine Carter and Maxine Davis; brothers, Clark, Gene and Jim Glaspell and two infant siblings.
Funeral services will be held 10:30 a.m. Thursday at the TAYLOR FUNERAL HOME in Amanda with Connie Taylor officiating. Burial will be in Amanda Twp. Cemetery. Friends may call from 2-4 & 6-8 p.m. Wednesday at the funeral home.
The family would like to express their sincere gratitude to the nurses and staff at Crestview for their loving care and compassion of Virginia and the support of Hospice of Central Ohio.
Memorial contributions may be made to Mt. Zion United Methodist Church, 1542 Mt. Zion Rd., Lancaster, Ohio 43130 in Virginia's memory.
To order memorial trees or send flowers to the family in memory of Mrs. Virginia Stone, please visit our flower store.